“If anyone asks you where you are going, tell them Xining. If you mention Tibet, it might cause unnecessary questioning and we don’t want that”. As we prepared to board our 6am flight from Beijing Capital International Airport at the start of our trip to Tibet, we all heeded this advice carefully. While making our way through security, I suppressed my anxiety about potentially being too excited, mentioning Tibet,  and being the person who would be kept behind while everyone dashed to the boarding gate to catch our flight.

It was difficult to not be completely thrilled by the trip to Tibet. Not being able to be upfront about our end destination was, however, a jolting reminder about the prickly socio-political context in the region, and the tensions that exist between the People’s Republic of China (PRC) and Tibet. Tibet was incorporated into the PRC in 1951 after a successful military campaign by the PRC against the then effective Tibetan government. Since 1956, the Tibet Autonomous Region (TAR)  has been a province-level autonomous region of the People’s Republic of China.

The debate on the autonomy of Tibet is a polarised one. Rights groups, Tibetan exiles and members of the international community have been critical of China’s “iron fist” rule in the region and its repression of Tibetan Buddhists and local culture.  On the other hand, the official narrative from the PRC is couched in a harmonious and cooperative manner, in the context of China’s ‘peaceful liberation’ of Tibet in the 1950s.

We spent the longest amount of time in Lhasa, which is both the capital and second largest city in Tibet. It is an interesting place. Visually, it is straddled somewhere between what I interpreted to be a traditional Tibetan aesthetic (with the old buildings, monasteries and temples, the traditional dress that is worn by most Tibetans in the city), and a city experiencing development and considerable economic investment. Close to Bhakor street, an ancient round street near the Jokhang Temple, a construction site with the foundation and scaffolding of a new building with at least five floors can be found. Our tour guide said that it is a new mall that is being built. It will contain a number of different shops and restaurants, including a KFC.

As China continues to invest in the development of the region, the faces of Tibet’s cities will continue to transform. According to an article from The Atlantic, “from 1952 to 1994 the Chinese central government invested $4.2 billion in the region”.  Financial investments in the region have been accompanied by increased migration of Han Chinese to areas in Tibet, who often serve as workers. It is estimated  that up to 90% of Tibet’s government’s revenue comes from outside of the country with China being a key provider of capital and infrastructure. The potential socio-economic benefits of China’s financial and human capital investments in the region becomes complicate potential assessments of China’s treatment of Tibet.

Geographically, Tibet is simultaneously breathtaking and harsh! We reached the highest elevation during our trip when we stopped to take photos at the Karo La Pass which sits just under 5000 metres above sea level. Our minivan stopped on the side of the road. As I stepped out and left the warmth of the vehicle, I marvelled at the grand snow-capped mountains spread out around me, hugging the road we had been travelling on from both sides. With everyone outside of the minivan, I think half of us expected to be temporarily incapacitated by the paucity of oxygen at such a high altitude. We did quite well, though, managing to carefully coordinate a solid group photo, do some individual wondering and squeeze in some selfie taking.

What are the views from the rooftop of the world like then? Dizzying, to say the least. But in a good way. Prayer-flagged mountains, turquoise waters, grand temples, sweet teas, yak meat dishes, incense, chanting, red robbed monks, poor infrastructure, empty apartment blocks and fast-food restaurants. These are all elements that both fuse together and collide in forming my memories from the trip.

A few days into my arrival in Beijing, as I struggled to recount the details of the trip to curious friends and family, I was struck by a question from a close friend who lives in South Africa. “Are you back in China?” she asked. I was immediately reminded of a moment at  Jokhang Temple when a friend and I stood peering over one of the terrace walls at the people below, who were prostrating and praying as the sun set. I turned to him and said, “this doesn’t feel like China at all!’. He agreed. Being back in Beijing, however, specifically, when I listened to my friend’s question, I found it strange to think of Tibet as outside of China. I was again reminded of how complex packaging and thinking of Tibet can be. 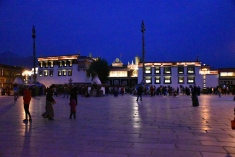 When planning a trip to Tibet there are many things to consider. Research on altitude sickness remedies, the best places to get a yak burger and the best places to visit often rank high on the pre-trip prep list.  Any preparation is, however, incomplete without at least some kind of reflection/research on the socio-political context of the region, and the unsaid things this will enable a visitor to understand about Tibet’s people and places.

2 thoughts on “Views from the ‘rooftop of the world’”

This site uses Akismet to reduce spam. Learn how your comment data is processed.