The historical site of the Terracotta Army is one of the greatest cultural treasures of Xi’an, and more importantly, of Chinese history. The Terracotta Warriors’ army was unearthed in 1974, Xi’an, when a farmer named Yang Zhifa dug into his farmland to create wells. These pieces of clay statues, buried deep in the ground, revealed one of the greatest archeological discoveries ever to be found. 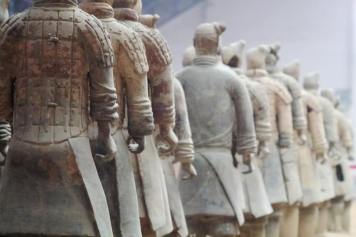 This astounding archeological discovery included “clay statues reaching up to 2.0 meters tall, weighing in at roughly 270kg each, and in the form of warriors, archers, generals, and even horses and their chariots”.¹ During the trip we had the opportunity to tour three of the pits which were excavated in a manner that would protect the clay statues from losing color due to air damage. Thousands of life-sized warriors and clay horses stand tall in a square formation, facing the east, throughout 5 acres of farmland. What is most astonishing is that each soldier possessed its own unique characteristics, from their hairstyle and facial expressions, to their “waistlines depicting wealth and rank”.¹ No two soldiers are the same. The onsite Terracotta museum also contains very well-preserved treasures from the pits, including the carriage made from gold and silver. Some of these are shown in the pictures below. To learn more about the Terracotta Army, click here.

Zhu Yuanzhang, the first Emperor of the Ming Dynasty (1368-1644), began to enlarge the city wall initially built during the old Tang Dynasty (618 – 907) in order to defend the capital firmly and establish his rule, while carrying out campaigns to unite the land. Thus, he initiated the modern construction of the Xi’an City Wall. It is the most complete city wall that has survived in China, and is one of the largest ancient military defensive systems in the world.

The extended city wall is 12 meters tall, 12-14 meters wide at the top and 15-18 meters wide at the bottom. It covers 13.7 kilometers in length, which can be covered in an hour of cycling tour in a decent tempo. The deposit for bikes are 200 RMB and the two-hour fee for bike rental costs an additional 45 RMB.

To conclude this series I have put together a couple of pictures of the four of us African ladies, taken during the trip. Enjoy! 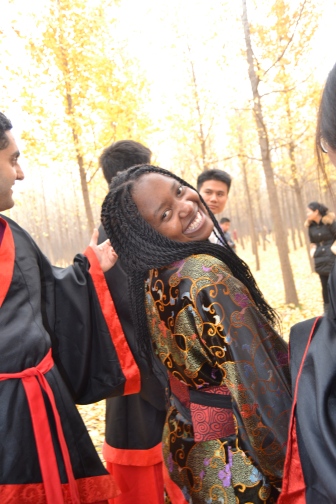 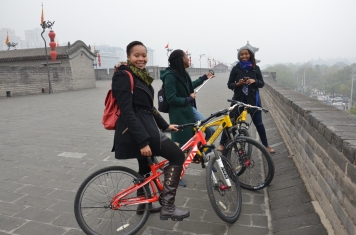 Compiled and Edited by Nothando Khumalo

This site uses Akismet to reduce spam. Learn how your comment data is processed.